Yet another controversy has developed involving Facebook and how they use your personal information. But this time, Facebook isn’t the only one doing it.

The news and blogs are full of stories about social media and other companies collecting, using and even selling your personal data. Facebook recently settled a case with the Federal Trade Commission, promising to behave in the future with the invaluable personal information it gathers about its users. Google entered into a similar consent order at about the same time. Both are now being accused of violating those agreements.

What has received little attention so far is a new generation of programs, called trackers, secretly embedded in many of the web pages you probably visit all the time. Trackers quietly gather information about you and your browsing history; and can send that information back to their mother ship to do whatever they want with t. One example of a tracker is the Facebook “Like” button that you see on web sites almost everywhere. It's doing more than you might expect...even if you don't click on it.

They're Slowing You Down, Too

Trackers also slow you down, sometimes more than doubling the time it takes to load a web page. The chart below shows how long it takes some popular web sites to fully load with the trackers blocked vs. running.* 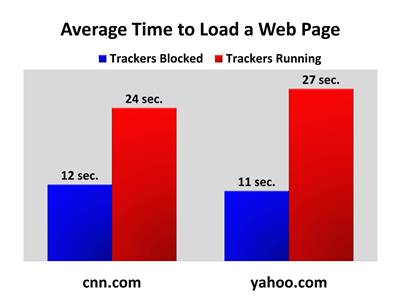 You're spending a lot time on the internet waiting for web pages to load, so trackers can harvest your personal information and use it to push ads at you or worse. The New York Times recently reported that you might be denied credit or insurance because of your browsing habits or searching. Much of this is being done without your knowledge or permission.

If you own a business or run an IT department for one whose employees need to use the internet during the day, think about how much of their time and your bandwidth and money these trackers are wasting; gathering information about your workers and your network.

How to Block Trackers

Until the law safeguards your personal information and bandwidth (if ever), there are some things you can do to help protect yourself. One is to stop some of the trackers that you don’t want harvesting data about you and your browsing habits.

Short of going to court for a restraining order, you can download and install several free browser plugins** that claim to stop these programs from executing. You might also get back most of your lost bandwidth they're consuming. 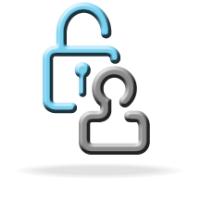 We took a look at the current state of U.S. and EU privacy and data security laws. Not only are the laws different, but the two may be heading in entirely different directions, with the U.S. adopting a more pro-business stance and the EU becoming more pro-consumer.

For example, the European Parliament is about to consider adopting some very consumer-friendly regulations, including a “right to be forgotten” online. If adopted, technologies like trackers could soon be banned there.

Facebook is concerned about potential future legislation in Europe. Facebook mentions in several places in its recent IPO that new laws, regulations or lawsuits could hurt its business. The company ignores the damage (other than to itself) that irresponsible use of personal information could do to millions of ordinary people. Apparently it’s all about squeezing every drop of profit out of the bottom line (or at least having the ability to do so).

Facebook has already had problems in Europe. In August of 2011, the Northern German State of Schleswig-Holstein found that Facebook’s “Like” button tracker violated German and European privacy laws; and ordered all sites in the state that use the Like button to remove it or face big fines.(1)

Microsoft also seems concerned. Its chief operating officer and associate general counsel in Europe recently said the proposals “may be too prescriptive” (we think he meant “PROscriptive”, but we get the point).

We're guessing that Google, which profits from your personal data much more than Facebook, is not happy with the stricter proposed laws either.

Disclaimer: The information provided in this article and the related comments is not intended to be legal advice, but merely conveys general information related to technology issues that are in the news; and does not create an attorney-client relationship. If you need legal advice, speak to a qualified attorney.

*To eliminate the time it takes to load the text and graphics that you want to see, we did not count the first time each page loaded. So, this should approximate how much longer you have to wait because of trackers.

**Caution: We do not endorse or recommend any of the above plugins. Keep in mind that they are free. They could gather and use your information or install something on your system that you don’t want. Use them at your own risk.