A massive ransomware attack using a new variant of the Petya malware originated in Ukraine yesterday and spread to companies across the globe. We are monitoring the situation for our global customers. Here is what we know about the malware, including possible attack vectors, what you can do to help protect yourself, and how we are protecting our SpamStopsHere customers.

With help from developer Greg C.

Although the original attack vector is as of yet unconfirmed, it is apparently spreading through Windows systems via an exploit known as EternalBlue that Microsoft made a patch available for in March 2017. With this exploit, remote attackers can execute code on a target computer through the SMB version 1 (SMBv1) server used by various versions of Windows. It runs the ransomware on the target machine and spreads it to connected computers on the network that have the same vulnerability.

Update: Microsoft and others are reporting this Petya variant includes several sophisticated techniques for moving laterally across a network. These apparently include using a modified open source tool called mimikatz to scrape memory for passwords, hashes, tokens, etc., for use in spreading to other machines, whether they have security patches installed or not.

There is speculation that this variant can run with either user-level or admin access. With user-level access, it will only encrypt certain files. However, with admin rights, it overwrites the master boot record on the system, schedules the computer to reboot, then boots itself. The actual encryption may occur before or after the reboot. Our analyst has looked at the malicious code and confirmed at least a portion of this.

During the reboot, it displays a fake CHKDSK screen pretending to repair the computer's file system. This is probably to throw off the victim while the malicious code is encrypting files: 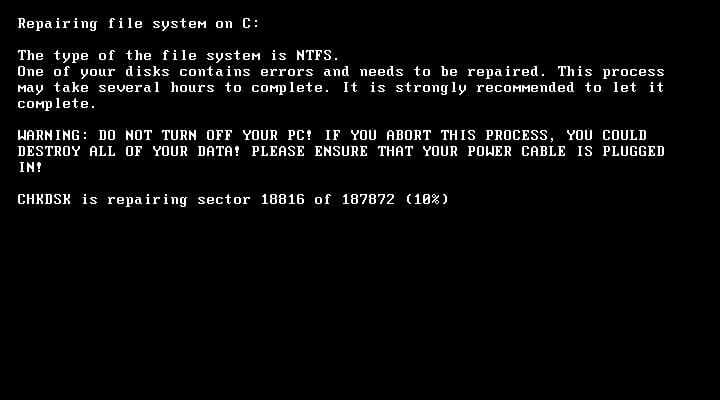 After the files are encrypted, it displays the ransom screen where it demands payment in Bitcoins to decrypt your files: 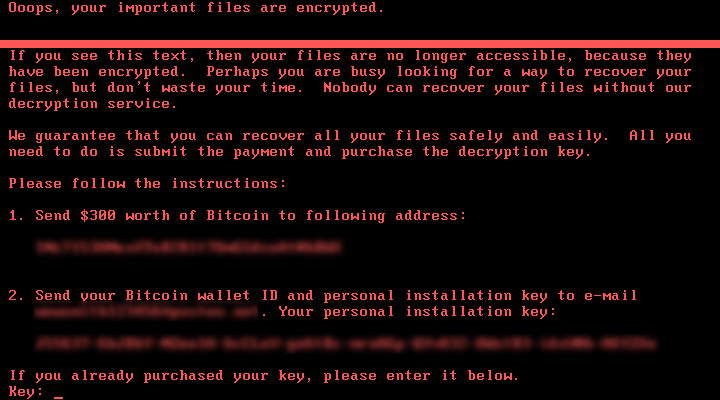 Note
The FBI discourages paying the ransom in these situations. Even if you are considering doing so, there is no guarantee you will regain access to your files. There are reports that the communication method for this scam has been shut down, meaning that even if you pay the ransom, you may not be able to get the decryption key.

This variant of Petya may also be using WMI (a component of Windows) and PsExec (a Windows tool), along with credentials found on infected machines to access others on the network, according to Talos.

The original vector is still unknown as of this writing, but we do know that a version of Petya was spread via email in 2016. It may be attacking via email with a new variant now. Other possible attack vectors could be through “malvertising” or browser exploit kits. In either of those cases, the attacker tries to exploit vulnerable versions of browsers or browser plugins to infect the target machine. From there, the malware can spread directly to networked vulnerable systems without using email.

What We're Doing to Protect Our Customers

Even though the original attack appears to have been somewhat targeted and the attack vector unknown, we are taking steps to protect our global customers from potential email-based Petya attacks. Any attached executables would have been blocked by existing filter rules and we have confirmed that it was not attached to emails bound for our customers yesterday. To bolster our defenses even further, we have created new signatures to detect this particular variant.

What You Can Do (Best Practices)

Regardless of the antivirus protection you have, you should observe best security practices, including: