With Obamacare (the Affordable Care Act or ACA), HIPAA and HITECH constantly in the news, how to handle PHI (Protected Health Information) is on the minds of doctors, hospitals, urgent care clinics, and other healthcare providers.

As a provider of email encryption to industries like finance, legal and health care, we like to stay on top of data security trends. We were curious to know how 2014 is shaping up in terms of data breaches, so we analyzed some of the relevant data and have summarized it here. Here is a snapshot of reported data breaches from Q1 2014 in healthcare / medical, compared to Q1 in the previous two years.*

The number of reported data breach incidents was down from 57 during Q1 2012 to 27 during Q1 2014. Although that's a huge decrease, keep in mind that numbers from month-to-month can vary. 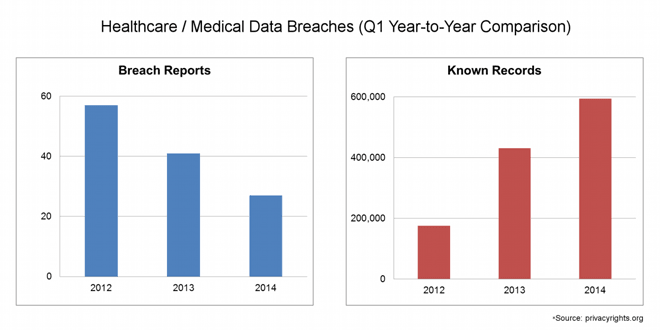 The number of data breach reports during Q1 2014 was down compared to the previous two years, but the number of records breached was way up.

To see how much they can vary with each breach, here are the number of known records involved in data breaches during Q1 of each year.

The number of data records involved in each reported breach can vary considerably.

There are numerous ways in which data can be breached, from paper records to hacking to device theft. The types of breaches during Q1 the last three years has also varied a lot. 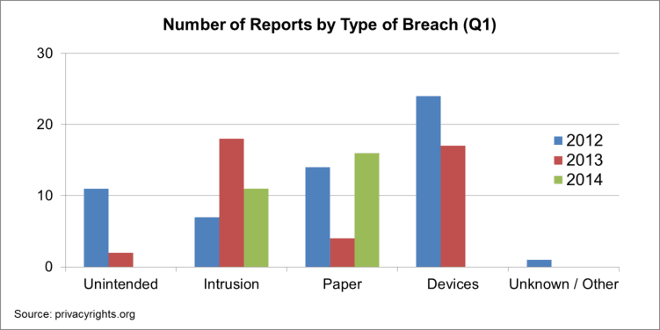 Surprisingly, breach reports triggered by unintentional disclosures and electronic devices (e.g., computers, tablets, phones, thumb drives) are down to none in Q1 of 2014. On the other hand the number of reports due to cyber-intrusions and non-electronic records (such as paper) are up.

It may be that health care providers are encrypting laptop hard drives, switching to secure Cloud-based services (like Greenview Data's email hosting), can remotely wipe devices and have taken other measures to reduce device breaches. But they are apparently still dealing with paper headaches and cyber-crimes (like hacking).

One way to reduce exposure from hacking is to get Protected Health Information (PHI) off your office computers, laptops, smart phones, backup drives, etc. and move it to secure data centers with geographic redundancy and automated archiving. You can do that by using secure cloud services for practice management, email, etc. No more USB thumb drives with patient info floating around the office.

We offer the following:

Our hosted business email services are available anytime, anywhere from virtually any web-enabled computer, smartphone or tablet (Apple, Android, Windows and Blackberry 10). 24/7/365 live support for all issues is included.

Use them separately or together. For example, to help you comply with HIPAA, add our encryption to your existing business email service --- or host your email with us and bundle it with encryption at special pricing.

If a conversation about secure email makes sense for your practice, give us a call, chat or email anytime. We're always here. 24/7/365.

*Source: privacyrights.org. The first quarter is defined as January 1st through March 31st.

Nothing in this article or the links we've provided constitutes legal advice or creates an attorney-client relationship. Consult a qualified attorney if you need legal guidance or advice.